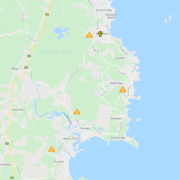 Have confirmed outage of Surf Beach, Malua Bay, Tomakin, Broulee and Bimbimbie Optus Mobile Towers. I suspect the fibre optic uplink which supplies Internet to the towers is currently down.

Also some fixed cable connections (nbn) are also affected and down (not Telstra-backed connections).

As per the norm - no ETA to be resolved at this time.

Services have been restored to the Mobile towers that went offline 13th of February (except for Bimbimbie, and Malua Bay is still running on the Satelite Cell on Wheels (Sat CoW)). Your Optus mobile coverage and Internet connectivity should have improved closer to normal. I am told that the outage was caused by the failure of the generator at the main tower which also feeds the surrounding tower.